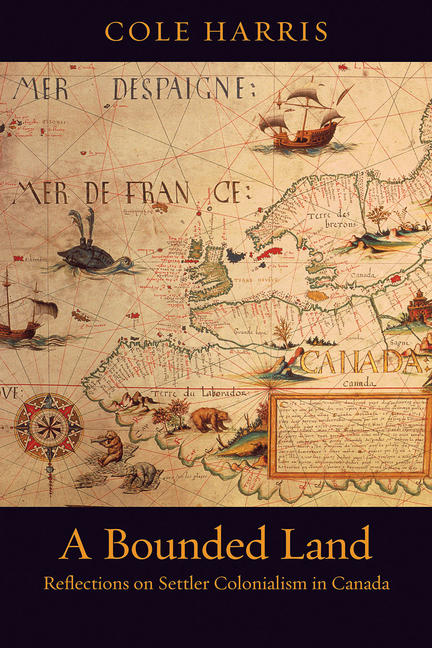 A Bounded Land seeks to investigate the colonization and settlement of Canada, including the subsequent dispossession of Indigenous Peoples, through the lens of historical geography. The culmination of Harris’s lifetime of study, the book includes previously published essays and articles, organized into five parts. This anthology thoroughly demonstrates the relationship between people, communities, and the land over 500 years of history. The illustrations, historical and contemporary maps, and descriptive tables are important to explain the text. This book is an excellent resource for teachers wanting to gain a greater understanding of the historical and contemporary significance of settler colonialism. | Cole Harris is a Canadian geographer and professor emeritus at the University of British Columbia.

Cole Harris is a Professor Emeritus at the University of British Columbia. He is the author of several books, including Making Native Space: Colonialism, Resistance, and Reserves in British Columbia (UBC Press, 2002), which was nominated for the Hubert Evans Non-Fiction Prize, and The Reluctant Land: Society, Space, and Environment in Canada before Confederation (UBC Press, 2008), which won the Srivastava Prize for Excellence in Scholarly Publishing. He is an Officer of the Order of Canada and a Fellow of The Royal Society of Canada. He lives in Vancouver, BC. To this day Harris and his family maintain a summer home on property originally staked out by his grandfather.

A Bounded Land is a guided tour through the work of a brilliant, insightful, and compassionate mind and body of work.

This is the most informative, penetrating and best-written account that I have read on the topic.

Overall, this book is not only a fitting capstone to an extroardinary career, but also an excellent primer for understanding Canada's settler colonial past.

A Bounded Land brings new dimensions and reflections to the work of Cole Harris as a scholar. The themes turn on settlement, colonization, dispossession, re-settlement, and the concluding theme throws light on Indigenous displacement and theories of empire and decolonization.

It is to Harris’s credit that the innovative assembly of spatial and social vignettes in A Bounded Land prompts our reflection on Indigenous and settler relations in colonial Canada.

Cole Harris has produced an eloquent compilation of work on settler colonialism in Canada.

There is a lot packed into this book ... [It] highlights the theoretical and practical policies that underwrote colonialism. In doing so, it helps to explain how the history of dispossession became inseparable from the rise of nation-states such as Canada.

The Canadian Journal of History