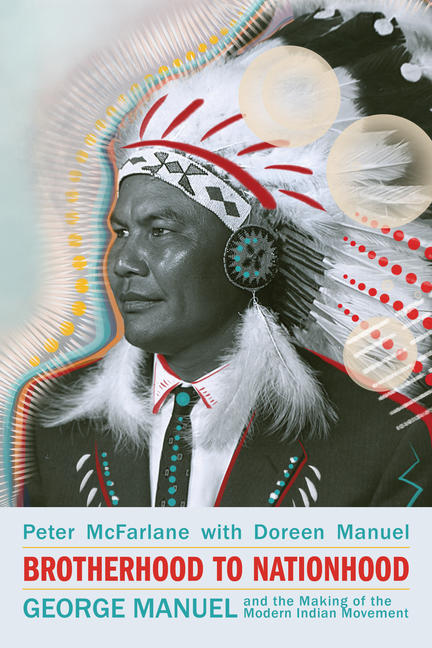 Brotherhood to Nationhood is not only George Manuel’s memoir, but an insider view into the beginnings of Indigenous activism, ongoing political resistance, and political movements that are the foundation of much of Indigenous reclamation and resurgence today. George’s involvement in leading the North American Indian Brotherhood, the beginnings of the Assembly of First Nations, and becoming the president of the Union of BC Indian Chiefs led him to be a spokesperson throughout his life for Indigenous rights internationally. This reprint of the original published in 1993 is now made more authentically representative of Indigenous voice though the addition of contributions from the perspective of Manuel’s daughter, Doreen, in this more comprehensive account. This text outlines George Manuel’s journey personally and politically, exploring themes such as politics, Indigenous rights to land and title, residential schools, and legacy of colonization.

Peter McFarlane is an author, journalist, and editor. His books include Northern Shadows: Canadians in Central America and Ancient Land, Ancient Sky: Following Canada’s Native Canoe Routes. He currently lives north of Montreal and is engaged in a number of writing and editing projects.

Doreen Manuel (Secwepemc/Ktunaxa) comes from a long line of Indigenous oral historians and factual storytellers. She is an award-winning filmmaker and educator, the principal owner of Running Wolf Productions, and the director of the Bosa Centre for Film and Animation at Capilano University.

River Bar First Nation in northern New Brunswick. She has two children, Mitchell and Jeremy, and a large extended family. Currently, she holds the position of Associate Professor and Chair in Indigenous Governance in the Department of Politics and Public Administration at Ryerson University. Pamela has worked for the federal government on Indigenous legal and governance issues, and has held several director positions at Indian and Northern Affairs Canada. She completed her doctorate in the Science of Law at Dalhousie University Law School, and holds a Master of Laws from Dalhousie University in Aboriginal Law, a Bachelor of Laws from the University of New Brunswick, and a BA with a double major in Native Studies and History from St. Thomas University in New Brunswick. She has specialized in Indigenous identity issues, which include Indian status, band membership, and self-government citizenship, and traditional Indigenous citizenship.

“As a chronicle of postwar Indigenous resistance—from the back-breaking work of organizing communities to the building of the Assembly of First Nations and the fight for Aboriginal rights—this book is unmatched in its detail. As a testament to the many Indigenous women, without whom none of this could have happened, whose hard labour in struggling to keep families alive empowered that generation of Indigenous men, this book is even more important. Finally, as an exploration of the vision and strategic brilliance of George Manuel, and the power of his leadership, Brotherhood to Nationhood is without parallel. To understand the strength and clarity of today’s Indigenous activists and theorists, we must begin with George Manuel.”

chair of the Department of Equity Studies at York University

“Peter McFarlane’s classic biography of George Manuel is an intimate and meticulously researched history of the leader and his life’s work, discussing the critically important subject of Indigenous land and liberation. An absolute must-read.”

“A gripping account of the life of a brilliant Indigenous leader whose vision remains a powerful blueprint for Canada’s unfinished business of decolonization. Like few books I know, it vividly conveys the sacrifices, rewards, and hard strategic choices involved in organizing for political change. The next generation of activists should read it to learn just how much we are indebted to the Manuel family’s legacy.”

“Brotherhood to Nationhood is more than just a biography of the life of George Manuel; it demonstrates the roots of an Indigenous internationalism and political theory that is grounded in the ethics, knowledge, and practices of the Secwepemc people.”

author of <em>As We Have Always Done</em>

“Brotherhood to Nationhood is a necessary and critical book to read for anyone, Indigenous and non-Indigenous, who is interested in the life of George Manuel, one of the greatest contemporary Indigenous leaders in Canada and internationally.”

“We live in a time of colonial reconciliation amputated from truth, of extractive predation by the state and its citizenry, of denial and willful amnesia about Canada’s violent past and present. George Manuel’s decolonial vision speaks just as strongly today as during his lifetime, and it continues in the commitments of his family and his people. This new and expanded edition of Brotherhood to Nationhood reminds us of the transformative possibilities of a life’s work grounded in truth and a relentless commitment to decolonial justice. We need this book, more now than ever.”

“This second edition, with updated text co-written by Doreen Manuel, includes brand new insights, including the key role Indigenous women played in George Manuel’s story. Uplifting and inspirational, this book honours the legacy of a visionary political strategist, refreshing our collective memory on how to combine tact with toughness, organize effectively, build respectful relationships, live humbly, and to treat every step—either forward or backward—as a new learning experience in the larger struggle for Indigenous rights.”